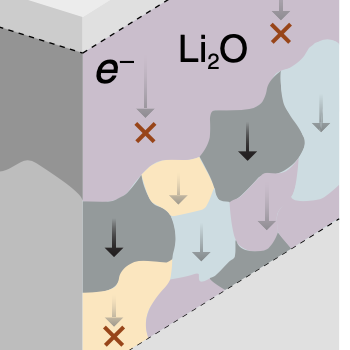 The solid-electrolyte interphase (SEI) is crucial to the electrochemical performance of all-solid-state batteries (ASSBs). Theoretical characterization of SEI properties will help understand the origin of interfacial stability (and instability) between solid electrolytes and electrodes. Among solid electrolytes for Lithium(Li)-ion ASSBs, the lithium phosphorus oxynitride LixPOyNz (LiPON) is one of the most stable against Li metal anode. However, it has been shown that LiPON reacts with Li metal and forms SEIs. The SEI formation stops after a thin layer is formed, but the mechanism that enables this apparent stabilization is unclear. Thermodynamics underpins the defect formation in materials and in turn, creation of electronic charge. Materials for energy storage, including solid electrolytes, are no exception to this fundamental process. Here, we computationally evaluate the electronic passivation of SEIs and its role in stabilizing the Li-LiPON interface. Specifically, we determine the defect and charge carrier concentrations in Li-LiPON SEIs, including Li2O, Li3N, Li3P, and Li3PO4. The defect and charge carrier concentrations were calculated from defect thermodynamics. We then predicted the electronic conductivity of the SEIs under different electrochemical conditions, which correspond to varying potentials to the Li metal anode. Our results reveal that the stoichiometrically abundant and uniformly distributed Li2O has expectedly negligible electronic conductivity, while the electronically conducting components, such as Li3N and Li3P, show preferential distribution in the SEI. We posit that the overall electronically insulating nature of the SEI is responsible for the stability of the Li-LiPON interface. The computational approach adopted here can be extended to reveal the origin of the interfacial stability in other ASSBs.